Note: The following was transcribed by the Author from an image of an old newspaper that was mounted on cardboard.

They Wore the Same Caps in the ‘70s, but What a Difference in Their “Set-Up!”

Through the official order was Commissioner Binghams’s pretty nearly every high official in the Police Department had claimed credit for suggesting the natty caps with which the force is now equipped and yet “the finest” wore those self-??ns caps more than thirty years ago before a goodly number of the men now pounding the pavement were born. Later the caps were abolished and the helmet substituted.

In turn Commissioner Bingham has relegated the helmet to the rear and had gone back to the old cap as more comfortable and far neater in appearance.

Compare the slouchy, almost unkempt policemen in the one picture with the well-groomed, well-setup, carefully dressed men in the other. Isn’t the difference in their bearing and set-up evident?

The one picture was taken in front of the old Eighth Precinct Station-House at Prince Street and the men in the picture have long passed away. Only four or five of the men who made up that platoon are now living.

It doesn’t take half an eye to note that the old fashioned policeman was careless and slouchy. Several of the men have their coats unbuttoned – that is an offense, punishable by a fine nowadays. There isn’t a pair of creased trousers in the platoon and the shirts look as if the owners were ditch-diggers rather than members of “the finest.”

At the window, is the sergeant in command of the platoon. He hasn’t even bothered with putting on his uniform. He doesn’t think it necessary as long as he needn’t go out on patrol.

And who would think that the of the old-fashioned plainclothes man of the precinct? He looks more like a man who had just stepped out of a novel by Dickens or Thackery than a sleuth on the metropolitan police.

The whiskers that come more down on the front to have been quite prevalent in New York thirty years ago. Today such facial adornments are a rarity. There might be similar whiskers over Newtown way or down Annandale, S.I., but not in Manhattan.  Any policeman wearing chin adornment in the pictures are wearing would be unmercifully chided (?) by his fellow patrolmen.

Now note the other picture – your up-to-date policeman of 1907. This is a picture of one of the platoons attached to the West Sixty-Eighth Street Police Station. Even the station-house shows the difference between 1877 and 1907.

The military bearing, the splendid set-up, and the immaculate uniforms of the men, all show what thirty years have done for the metropolitan police force. The uniforms have changed greatly, and instead of the single row of buttons there is a double row. The insignia on the caps are different. So are the belt buckles. The design of the shield has been changed namely the caps which have recently been adopted over the helmet.

Altogether, the policemen of yesterday, cannot stand by the side of his successor, the professional, well groomed, well-set-up policeman of today.”

Originally shared on Feb 14, 2015 by the owner of the physical, mounted article,

Here is a view of what appears to be a photograph of a different platoon, taken in front of the same precinct  station-house. Note that the window is open in one photo and closed in the other, but the architectural design around the window frame is the same.

Today, 128 Prince Street is in the confines of the NYPD’s First (1st) Precinct, located on Ericsson Place.

Regarding the 1907 photo, said to be at the West Sixty-eighth Street Precinct Station-House: According to the author’s notes, in 1907, that was the location f the Twenty-sixth (26th) Precinct Station-House, located at 150 W. 68th St. Today, the building is long gone, but the architectural detail in the color photo matches that of the 1907 newspaper photo.

Today, the address is in the confines of the NYPD’s Twentieth (20th) Precinct, located on West 82nd Street. 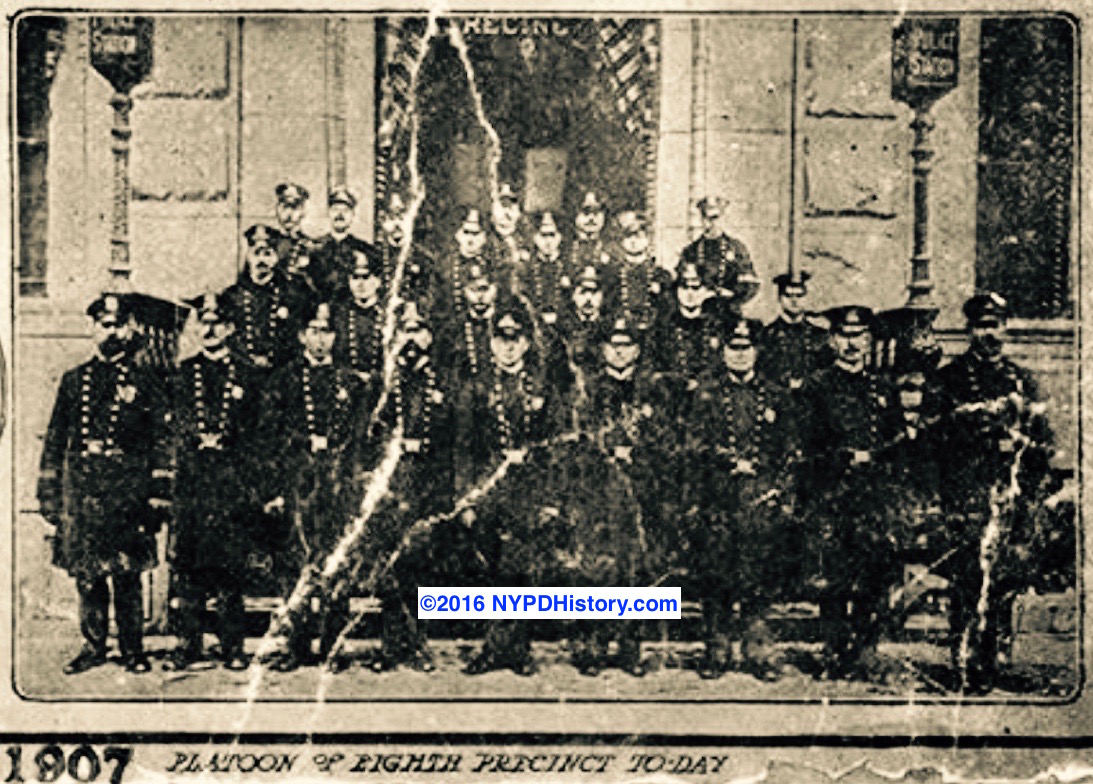 Again, today, the building at W. 68th St., below, is long gone, but the architectural detail in the color photo matches that of the 1907 newspaper photo, above.