This article is a sequel to then article published on this website on April 23, 2016, entitled: The Lost History of the PDNY’s Junior Police Force? Their Story Has Never Been Told!

The original article can be found at above link on www.NYPDHistory.com.

Two boys of the Lower East Side neighborhood, asked to speak with the Commanding Officer of the 15th Precinct, Captain (Capt.) John F. Sweeney, seeking to help the PDNY in some way. With the blessing of Police Commissioner (PC) Arthur Woods (1914-1918), the first unit of the JPF was formed. Within four years, there were units in every precinct in the city, and the JPF’s members numbered over 5,000!

The JPF officers educated the largely non-English speaking adult immigrants about hygiene, healthy habits, fire prevention, etc. Additionally, their duties included the education and monitoring of the behavior of children and the enforcement of minor violations of the law such as: making bonfires, graffiti, spitting, riding on surface cars (trolleys), stealing, gambling, etc.

In January 1919, as the result of a mayoral election, a new PC, Richard E. Enright, ordered that the JPF be disbanded and that their uniforms, equipment and shields be turned in to their precinct commanders. The JPF (in a non-police-related form) became an organization within the Department of Education.

The above-cited article (“the JPF article”) was the result of hundreds of hours of research and writing. The journey began in 2014 when (in the 1916 Annual Report of the PDNY), I came across the following photograph, accompanied by a brief description of the JPF’s function within the PDNY.

As a student of the history of policing in New York City, I read many books & articles on the topic, and only came across two paragraphs about the JPF of the PDNY in one book. (Click here to learn more about this recommended history book).

After months of research, I discovered few sources that tangentially dealt with the JPF. I believe that the above-referenced JPF article is the first attempt at capturing the comprehensive history of this important, but forgotten, chapter in the history of the PDNY.

Replies to letters written to two NYPD PCs, William J. Bratton and Raymond W. Kelly, indicated that the department had “no record” of the JPF or any information about its individual members. The letters to PCs Bratton and Kelly, as well as the JPF article, closed with the following three calls for action by the NYPD:

The first call for action was for the NYPD to formally recognize the JPF and its role as the genesis of many similar youth organizations, including the NYPD’s own current Police Explorer Program and the Police Athletic League (P.A.L.). The second, and most important call for action was to formally recognize the sacrifice of three JPF officers, identified during my research, who may have died in the line of duty (LOD). The third call for action was to have a plaque commissioned and placed at an appropriate location as a permanent reminder of the JPF and as a tribute to the same.

As a result of the 2016 publication of the original JPF article, I am delighted to report that the first two calls for action have been met and the third is in progress. The JPF article, and the efforts by a team of passionate, stalwart police historians (detailed below), has made history and has re-made the history of the NYPD, New York City, and beyond.

Teamwork Made the Dreamwork; Calls for Action Met:

In October 2019, Matt Kovary, (at the time) a member of PC James P. O’Neill’s staff, contacted me regarding the 2016 JPF article. Mr. Kovary advised that Inspector (Insp.) Terence J. Hurson, Executive Officer to PC Dermot Shea (January 2020 – December 2021) had taken note of the article on this website; that they had an sincere interest in daylighting the history of the JPF; and that “there is not a single piece of paper in the building (police headquarters) about the JPF or the possible LOD deaths of the three JPF officers.”

Partnering with the PC’s office in furtherance of accomplishing the previously delineated calls for action resulted in the restoration of a lost chapter of history and allowed me to share a multitude of research findings.

On October 6, 2020, Insp. Hurson advised that the NYPD had made the decision to officially recognize the existence of the JPF as part of the department’s history and that the board of review had considered the information available (to date) on the deaths of the three JPF officers to determine if the deaths qualify the officers for official recognition as LOD deaths.

Insp. Hurson stated that the NYPD officially approved the death of JPF Captain (Capt.) Tobias Gellis for official recognition as a LODD, and that the cases of the deaths of the two remaining officers remain pending and require further research.

The recognition of the LODD of Capt. Gellis, age ten at the time of his death, is truly historical, as the young officer is the youngest officer in the world to be so designated. Insp. Hurson further advised that on Friday, July 10, 2020, a “little”ceremony would be held at Capt. Gellis’s gravesite on Staten Island.

Additionally, Insp. Hurson advised that the NYPD’s Police Explorer Program could now re-write their history to reflect that the program began in 1914, on the immigrant-congested Lower East Side of Manhattan, by two Jewish immigrant boys and an Irish Police Captain, who envisioned, conceived, and formed the first Junior Police Force, that of the PDNY.

The Official NYPD Ceremony in Recognition of the Line of Duty Death of JPF Captain Tobias Gellis:

July 10, 2020, began as a cloudy, hot, muggy morning, with the serious threat of an impending tropical storm, and marked the 104th anniversary of young Tobias’ untimely death.  The NYPD turned out en masse to honor the life and death of JPF Capt. Tobias Gellis, at the Hebrew Free Burial Association, Mount Richmond Cemetery, Staten Island.

The department was represented by its Ceremonial Unit’s Honor Guard, a Bugler, Bagpipers and Drummers, members of the department’s Jewish fraternal organization (Shomrim Society), and dozens of officers from individual precincts. Dr. Rabbi Alvin Kass., Rabbi Emeritus, Chief Chaplain of the NYPD, and Insp. Hurson (representing PC Dermot Shea) were also present along with approximately two dozen uniformed members of the NYPD and a large contingent of the NYPD’s Police Explorers program.

At 10:00 am, as the heavy rain began, the sound of bagpipes filled the air as the Ceremonial Unit’s Honor Guard presented the colors (flags). After an introduction to the ceremony by a Ceremonial Unit Team Leader, Insp. Hurson addressed those in attendance.

A copy of the NYPD’s official handout for the ceremony can be viewed by clicking here. (A .pdf will open in a new browser tab.)

Insp. Hurson spoke about the history of the JPF, Capt. Gellis’s short-lived life as a Russian, Jewish immigrant on NYC’s Lower East Side, and Capt. Gellis’ assignment on the day of his death. Click on the following link to view, in a new browser tab, the video of Insp. Hurson’s introductory speech on YouTube. Insp. Hurson’s Speech

Chief Chaplain Dr. Rabbi Kass, led the assembled in prayer and spoke of the life and death of Capt. Gellis, drawing comparisons between the lives of the JPF officers and those of today’s Police Explorers. Chief Kass gave a primer on the service of Jewish immigrants to the city, dating back to the middle of the 17th century. Chief Chaplain Kass explained the Jewish custom of “consecrating a memorial in memory of the deceased which goes back many thousands of years.”  Closing with this impactful statement, Chief Chaplain Kass stated that Tobias Gellis’ “memory will be forever enshrined among the precious recollections of the heroes of the New York City Police Department.” Click on the following link to view, in a new browser tab, the video of Rabbi Kass’ introductory speech on YouTube. Rabbi Kass’ Introductory Speech

Led by the Ceremonial Unit’s Honor Guard and the bagpipers, the participants and guests marched in formation through the heavy rain to the gravesite of Tobias Gellis. The recently cleaned headstone was starkly different than those laid atop surrounding graves. Cemetery personnel suggested it dated to 1916 as the surrounding headstones were placed all at once, years after the individuals’ deaths. Who paid for Tobias Gellis’ headstone is not yet known. The inscription reads “Tobias Gellis, Born September 24, 1905, Died July 10, 1916, Rest in Peace.” According to cemetery personnel, there is no record of anyone ever having visited the gravesite, or of any relatives. Click on the following link to view, in a new browser video, the video of the Pipes & Drums Marching on YouTube.

After the Ceremonial Unit’s bagpipers played, the bugler played “Taps.” Rabbi Kass then prayed in Hebrew over the gravesite, and removed a white cloth that had been placed over the stone which symbolized a renewal of Tobias’ burial.  After a few words, the ceremony was concluded. Click the link to view a video (in a new browser video window) of the Bugler playing Taps.

Video of the Bugler Playing Taps

“Fidelis ad mortem” is the Motto of the Police Department of the City of New York.

“Faithful Unto Death.” The job certainly honors their fallen!

The impact of the story of the JPF, the lives of the boys who participated in civic duty, the death of Capt. Gellis, and the lineage between the JPF and today’s Police Explorer’s was palpable to all in attendance.

I will be forever grateful to PCs O’Neill and Shea, the very professional and capable staff of the PC’s Office, The Chaplains Unit, the Shomrim Society, the Ceremonial Unit, and the Police Explorers for remaining true to the department’s maxim to “Never Forget” those who sacrificed their lives in the performance of their duties.

Efforts to move forward on the outstanding call for action, to create a plaque for the JPF, remain ongoing. Once a commitment for funding, and approval by the NYPD are obtained, the plaque can be commissioned. A logical location for placement, is the birthplace of the JPF: today’s 9th Precinct Station-house which, at the time was designated the 15th Precinct Station-house. I hope the NYPD remains a partner in this continuing effort & that of further researching the other two officers’ deaths. 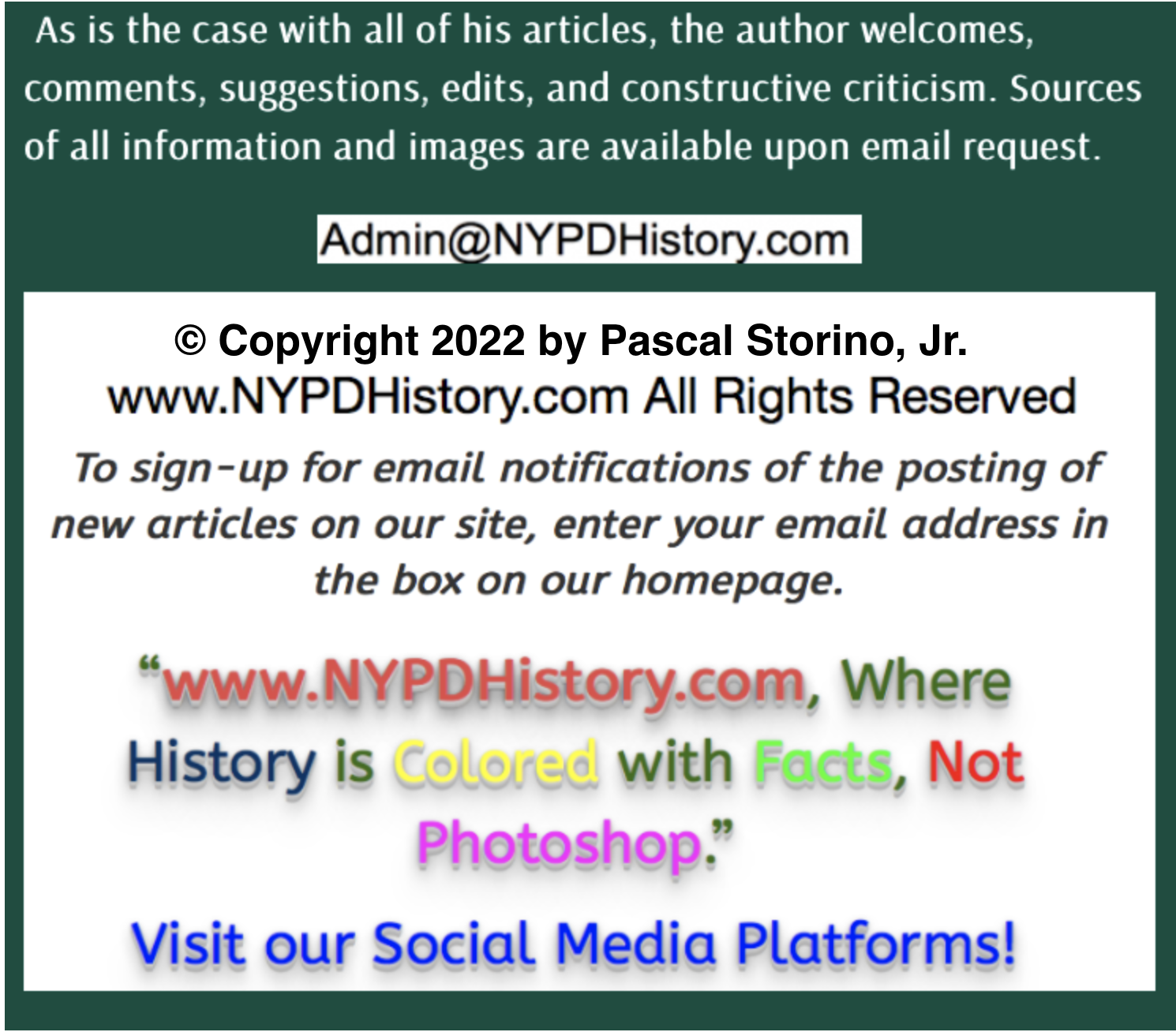