The Official Motto vs. a Popular Maxim

The official motto of the Police Department of the City of New York (NYPD/PDNY) is “Faithful Unto Death,” sometimes written in Latin as “Fidelis Ad Mortem.” Many confuse the motto with the maxim “Never Forget,” or “Never Forgotten.”

Many may not realize that the origin of the department’s motto is Biblical. The Bible, in Revelations, II:10, contains the sentence “Be thou faithful unto death, and I will give thee a crown of life.” To know the full passage is to understand the meaning and magnitude of the motto; be faithful unto death and you will receive, at the time of judgement by God, a specific reward for an act(s). The Biblical passages, “James 1:12 and Revelation 2:10 indicate that the Crown of Life is for those who persevere in faith through temptation, tribulation, and persecution.” (Source: redeeminggod(dot)com)

In relation to the PDNY, the phrase “Faithful Unto Death,” from the Biblical verse, was adopted by the department on the afternoon of November 25,1872. The date was the occasion of the department’s Annual Police Parade, at which time the officers who earned medals in the preceding year were presented to them by the mayor. Arrangements were made for a second ceremony, the purpose of which was for the department to receive a gift from “The Citizens of New York.” The gift was the result of a suggestion “that the citizens of New York, without distinction of creed, party, or nationality” should procure a gift. (Source for quote: New York Times, July 16, 1872)

The gift aimed to strengthen the esprit de corps of the men of the department and reflected the deep appreciation, gratitude, and recognition for the  bravery and valor demonstrated by the members of the department during two infamous riots; the 1863 Draft Riots and the 1871 Orange Riots.

The committee donating the gift, known as the “Citizens’ Committee,” believed that “after the July riot of 1863, it was commonly understood and admitted that this city was saved from sack by the splendid bravery and discipline of the police. After the July riot of 1871, it was admitted that they once again conspicuously distinguished themselves by the exhibition of the same qualities.” (Source of quote: New York Times, July 16, 1872)

Furthermore, the committee expressed that they expected that “It is of the first importance that everything should be done to keep this body of men non-partisan, efficient, thoroughly disciplined, faithful; the right arm of civil authority, the impartial guardian of the public peace and personal safety. The aforementioned expectations of the citizenry remain today. (Source of quote: New York Times, July 16, 1872)

The “very handsome” gift was called the “Flag of Honor” and was expected by the committee to be carried by members of the department in the annual parades, and at funerals of officers killed in the line of duty or “die in consequence of injuries received.” The flag was described as the “finest piece of embroidery of the kind made in this country.” The stitching took eight months to complete and cost approximately $1,200 to complete. (Source of quote: New York Times, July 16, 1872)

The following is a brief description of the Flag of Honor.

Presentation of the Flag of Honor to the Department

On November 25, 1872, the occasion of the Annual Police Parade, in Union Square, The Citizens’ Committee presented the Flag of Honor to a member of the Board of Police Commissioners. Joseph S. Bosworth, accepted the gift on behalf of the entire department, and the 1,200 men present stood at attention as the band played “The Star Spangled Banner.”

The Citizens’ Committee, “with the view to keeping it always fresh in the recollection of the men, have ordered a colored lithograph drawing of the flag” to be placed in every station-house in the Metropolitan district. (Source of quote: New York Times, Nov. 26, 1872)

It is believed that the above lithographed drawing (on a tin-like metal) may be one the above-mentioned recollection-fresheners.

On the occasion of the Annual Police Parade, held on June 1, 1888, the first of the newly designed Honorable Mention Medals, at the time, the highest form of recognition for valor, were pinned on those who earned them. This style medal remained the same until 1912.

From a previous article on this site, entitled “The Creation & Evolution of the NYPD’s Medal of Honor? New Facts Revealed!“ we find a description of the medal (See Figure 2, below.) 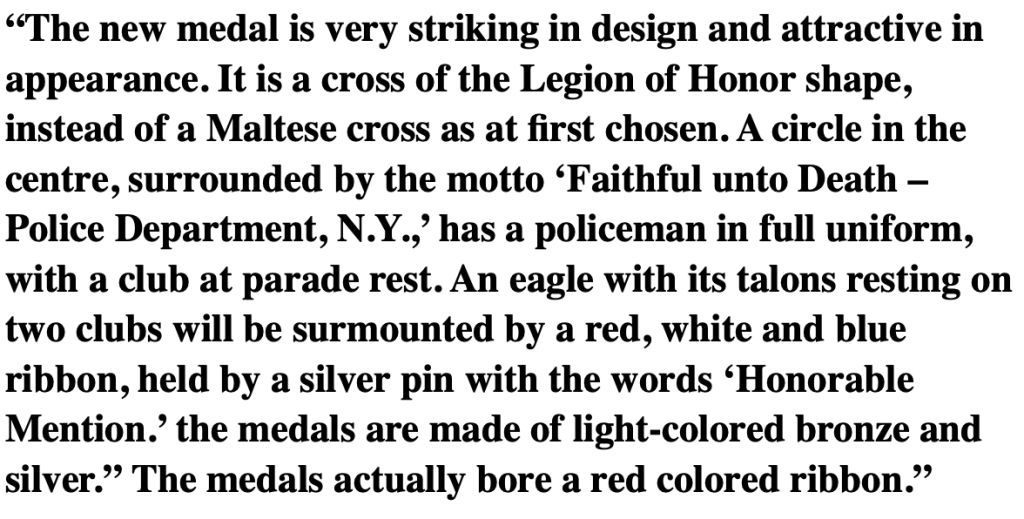 To read more about the creation and evolution of the NYPD’s Medal of Honor, click here. The authoritative article, published on this site in December 2016, will open in new browser tab.

The Flag of Honor, a gift by the citizens of New York City to their brave police department, represented a shift in the perspective of the city about their police department, which was previously perceived to be incompetent. It was noted that the officers “did their duty as brave, true men, even at the sacrifice of their lives.” (Source of quote: New York Times, Nov. 26, 1872)

Newspaper articles indicated that the flag was carried in the annual police parade of 1898, and in the 1909 funeral procession of the only officer in the history of the department to be killed in the line of duty overseas – Lieutenant Giuseppe Petrosino, of the “Italian Squad.” Lt. Petrosino was murdered in Palermo, Sicily while gathering intelligence on criminal aliens in New York City.

The Flag of Honor appears to have disappeared from mention in newspapers after 1909. A representative of the now dormant “New York City Police Museum” advised that the museum do not possess the flag. The Flag of Honor, the Police Arlington, and the World War I bronze tablet containing the names of PDNY officers killed during the Great War remain missing.

To read the article on the NYPD’s “Lost Tributes,” published on this site in May 2016, click here. A new browser tab will open.

This site is dedicated to all of the police officers who have given life or limb in the performance of their duties while in service to the citizens of this city.

This article is specifically dedicated to P.O. Jason Rivera, 32nd Precinct, a husband and father, who, at age 22, was ambushed and murdered by a career criminal on January 21, 2022. Fidelis Ad Mortem. 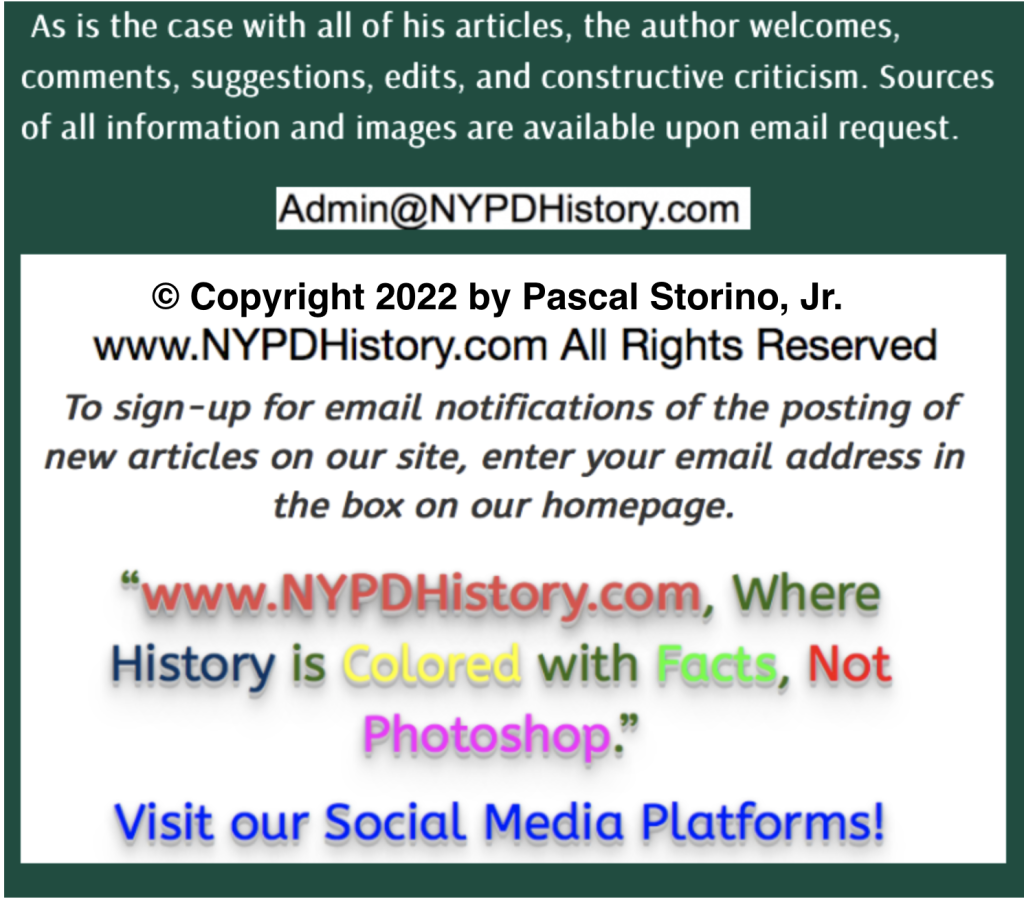