The Police Department of the City of New York (PDNY) has a long history of issuing various medals to its officers for acts of bravery, honor, valor, and other meritorious acts of service. Generally, the medals fall into two classes: those created and presented by the department itself, and those called “Citizen’s,” or “Donor” medals which were authorized and presented by the department, but funded by individuals or entities. Many of the early medals of both classes were works of art made of solid gold, created by the finest jewelers in New York City, including: Tiffany & Company, Dieges & Clust and Braxmar.

One Citizen’s Medal, was funded, created, and donated by an endowment from the Automobile Club of America (ACA). The ACA was an organization, incorporated in 1899, that represented the interests of automobilists, lobbied for favorable vehicle and traffic laws, and supported its members in many ways. Researching the topic, resulted in the conclusion that the exact year that the first ACA Medal was presented is unclear. There is conflicting and inconclusive information in newspaper articles and the ACA’s own publications and records. Nonetheless, the information that is known about the first recipients is an interesting story. An illustration depicting the ACA’s logo appears as an insert (Source: ACA Yearbook, 1908).

Those interested in the history of policing in New York City, will be delighted to learn that photographs, of what are believed to be the second version and the final version of this prestigious award, have been located. These images have not been circulated in online forums dealing with the topic of PDNY medals, nor have they appeared in a book on the topic.

Previous installments of this series of articles, covered the pioneering work of several of the first officers of the PDNY who used bicycles, motorcycles, and the department’s first department-owned automobile in the early enforcement of vehicle and traffic laws. Two of the officers covered in the previous articles, Benjamin Mallam and Eugene Casey, made department history when, in 1907, both received Honorable Mention, and were subsequently approved by the Police Commissioner, to receive the first issuance of the “Automobile Club of America Medal.” Such was Sergeant Casey’s reputation that an article appearing in the journal “The Automobile,” published on June 7, 1907, referred to the good Sergeant as “the terror of autoists” (automobilists).

The ACA Medal was not the first medal presented to Casey. In 1901, as a member of the Bicycle Squad, he received a Medal of Honor for stopping a runaway horse and carriage. According to an article that appeared in “The New York Times” on March 14, 1901, Patrolman Casey, of the Bicycle Squad, “was standing at the corner of twenty-third Street and Fifth Avenue” when he observed a horse drawn carriage racing up Fifth Avenue. Casey, according to the article, “mounted his wheel and stared after the runaway. At Twenty-ninth Street, he managed to get alongside the horse and was reaching for the bridle rein, when the horse swerved to one side and threw his fore feet up on the rear platform of (another) wagon.” The illustration (inset) depicts a bicycle officer performing a similar act. 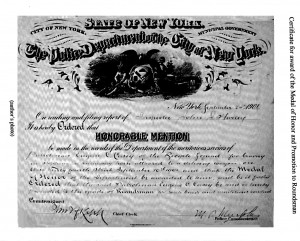 The 1901 incident resulted in Casey being awarded the Department Medal and he, thereby, joined the company of “Honor Men” who marched together in the annual police parades. Additionally, upon receipt of the Medal of Honor, Casey was promoted from Patrolman to Roundsman, which was the custom and practice established by Theodore Roosevelt when he served as President of the Board of Police Commissioners in 1895. An image of the certificate Casey received in connection with the 1901 incident appears as an insert. The image was obtained and published by the late PDNY historian, John Reilly, a retired First Grade Detective of the PDNY who authored what is considered the “go to” publication on PDNY medals.

According to the ACA’s journals, the medal was to be “awarded to the police officer in the city of Greater New York, who, in attempting to protect public safety, exhibits the greatest bravery and risk to himself.” According to Det. Reilly’s research, it was Patrolman Thomas F. J. O’Grady that was the first recipient of the ACA Medal, presented on May 8, 1909. However, information indicating that the ACA Medal may have been first presented to Casey & Mallam in 1907, and that is was not presented in 1908, was discovered and will be addressed in this article in detail.

The following insert from the 1911 “Club Journal” briefly describes the incident for which the ACA’s first Medal was awarded to both Casey and Mallam. Note that the journal indicates that the ACA Medals were awarded to Casey and Mallam in 1908. This 1908 date is at odds with other articles. 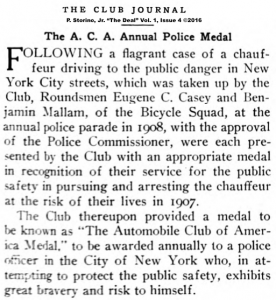 Department and “Citizen’s medals” were awarded at the annual “Police Parades,” which were held in the month of May, and were a display of the PDNY’s professionalism. The parades often showcased new equipment such as bicycles and motorcycles. The various inspection districts and divisions of of the department, as well as what was known as the “Company of Honor Men,” paraded before large, enthusiastic crowds. The company was comprised of officers who had previously received Honorable Mention.

An article in the May 11, 1907 edition of “The Evening Post” related the details of the annual police parade held earlier that day. According to the article, 6,000 officers participated and were reviewed by Mayor George B. McClellan (1904-1909), PC General Theodore Bingham (1906-1909) and other officials and dignitaries. The marchers paraded “up Broadway to Twenty-third Street, to Madison Avenue, to Fourth Street, to Fifth Avenue and then down the avenue to the monument at twenty-ninth Street where the line was reviewed.” The article concluded, “The men who got honorable mention today were Sergeant Eugene Casey and Acting Sergeant Mallon (sic) of Commissioner Bingham’s office staff.” What is not written is whether or not the Honorable Mention was connected with their having been awarded the ACA Medal.

The article covering the same parade appearing in “The New York Times,” on May 12, 1907, also did not specify the name of the medal awarded to “Lieut. Eugene C. Casey of the Central Office squad, and Acting Lieut. Benjamin Mallon (sic) of the Commissioner’s personal staff.” The caption of the photo (inset) from “The Automobile,” journal, dated June 6, 1907, does seem clarify the matter somewhat, but is not clear enough to make a conclusion. The discrepancy in the Casey and Mallam’s ranks between the two articles may possibly be attributed to the practice of promoting medal recipients at the time the medal(s) are awarded.

In light of this conflicting and unclear information, it remains unclear as to when Casey and Mallam received the ACA Medal, but what is clear is that they received the first ACA Medal, not Thomas F. J. O’Grady.

Regarding the ACA Medals themselves, Det. Reilly, with the assistance of others, located documents, belonging to the contracted jeweler, which described the proposed design for the ACA’s first medal. The image shown (insert) is an artist’s rendition of what that medal may have looked like. Due to the year 1907, this may have been the style of medal issued to Casey & Mallam. The colorization is the artists’s conception of the same.
According to the artist, who has researched medals and has reviewed the documents of the contracted jewelers, the design of the medals during this time period were an evolution. In addition to the medal depicted above, two additional versions of the ACA Medal have been identified and photographs have been located.

A photograph of the second version of the ACA medal was located in The ACA’s journal, dated May 15, 1909. It accompanied an article that related that on May 8, 1909, on the occasion of the annual parade, the ACA Medal “was presented to Thomas F.J. O’Grady, of the traffic squad, for stopping a runaway horse at Madison Avenue and Thirty-first Street on June 6,” 1908. In this article, the name of the medal is “The Automobile Club of America Medal for Bravery.” The photograph of the medal accompanying the article appears here as an insert.

Black and white photographs of the third version of the ACA Medal (obverse and reverse) were discovered by the author in the 1911 Yearbook of the ACA. The reverse of the medal reads: “Awarded to (blank) in recognition of bravery displayed at the risk of his life in the discharge of his duty.” Again, the colorization is an artists conception of the medal’s likely appearance. This medal (insert) is believed to be the final version of the medal which was issued annually through at least 1929 but not in 1931. On December 13, 1932, according to an article that appeared in “The New York Times,” the ACA Medal was “discontinued last year when the club went into receivership.”

A list of all of the known recipients from 1909 to 1929 may be obtained from the Author by email request.

“What’s the Deal With” the history of the Automobile Club of America Medal issued from 1907 to 1929? The body of evidence seems to support the theory that Casey & Mallam were the first to receive the ACA Medal. Due to conflicting information, it was either on the occasion of the Annual Police Parade of 1907, or 1908, that Sergeants Mallam and Casey were awarded the ACA’s first medal, for an act of bravery involving a pursuit of an automobile while they were riding motorcycles.

The object of “The Deal” is to share information on the history of policing in New York City. If you have an interesting story about the same, or a question, please email us at Adnin(at)NYPDHistory.com

Author’s Note: The Author would like to thank a dear friend, mentor, supporter, and talented artist for his guidance, input, and assistance in getting this article together. Credit is due to “Gunner” for the artwork exhibited in the image of the two medals, as well as in the detail and accuracy of key information presented. “Thank you my friend!”