When researching the history of the Police Department of the City of New York (NYPD/PDNY) information is sometimes found that contradicts that which has been established and accepted as “gospel.” The purpose of this article is to provide evidence that the current style NYPD shield was first issued in 1903 to “Patrolmen” or “Police Officers” of the PDNY, not in 1902, which is the widely held belief by the NYPD and others.

There are ample examples of the Patrolman’s shield, as it was designated when issued, where the number in the panel “1902” was used to represent the year first issued. These examples include manufacturer’s catalogs, PDNY publications, law enforcement publications, the website of manufacturers selling reproduction shields, and other sources both within the United States and abroad. Examples of various sources using the 1902 date are depicted below.

Thanks to the research and collaborative efforts of a few collectors, information which leads to the conclusion that the widespread belief that the shields were issued in 1902 appears to be proven to be inaccurate. Two categories of information; the official records of the City of New York, and the newspapers published in the era disclosed information about the issuance of the new shields.

On May 22, 1903, the records of the City of New York (NYC) reported that Police Commissioner (PC) Francis Vinton Greene (1903-1904) recommended the approval of a PDNY committee to determine a change in the shields worn by Patrolmen. It was ordered that the Chief Clerk of the City of New York prepare specifications for, and advertise to invite proposals for, the purchase of 10,000 shields per a sample supplied by the committee. In an article, published on July 16, 1903, the “Daily Star,” a NYC newspaper, reported that “The new shields for the caps and coats of the Police Department will have larger numbers on them than the old ones” and that the numbers would be approximately one-halt to three-quarters of an inch in height. The PDNY issued/issues what is known as a “cap,” or more broadly, “cover” device which bears the breast shield number of the officer.

On August 6, 1903, the records of NYC reported that a “contract with the American Railway Supply Company (ARSC) for shields is valid and endorsed by the Comptroller on July 16, 1903.” A sample page from an American Railway Supply catalog appears here in an insert. According to an entry in the NYC record of August 12, 1903, the samples received by the ARSC were forwarded to the Third Deputy Police Commissioner. The same source, on October 22, 1903, indicated that the ARSC had delivered 7,000 police shields. 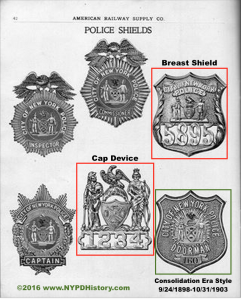 Providing great detail about the issuance of the new shields, the city records disclosed “Ordered, That on and after 4 o’clock p.m. October 31, 1903, the shield for Patrolmen furnished under contract with the (ARSC), executed on July 16, 1903, shall be known as the patrolmen’s shield of the Police Department of The City of New York, and recognized as such, and that the Chief Inspector be and is hereby directed to issue the necessary orders for the delivery of such shields and the return of old shields.” Reporting that the shields were in fact issued, the “New York Daily Tribune” on November 1, 1903, reported that “New shields were handed out to the 6,810 patrolmen of the Police Department yesterday. the new shield is almost exactly like the old one, with the exception that the number of the policeman is larger, and on the bottom of the badge, instead of being in the middle.” the article indicated that “patrolmen will also receive new numbers for their helmets.”

“What’s the Deal With:” the first use of the current style Patrolman’s shield by the NYPD? Evidence, beyond a reasonable doubt, supports the fact that the current style shield, worn by today’s Police Officers of the NYPD, occurred on October 31, 1903, at 4:00 p.m. The reasoning behind the change was to add larger numbers to the shield so that officers could be easily identified by their assigned number by others. 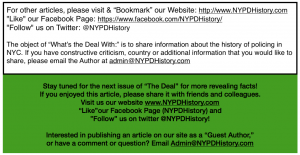