Much has been written about the life of William S. “Big Bill” Devery who rose through the ranks of the Police Department of the City of New York (PDNYC) to hold the offices of Deputy Commissioner and Chief of Police. “The Chief,” as he was referred to, was a “Tammany Man” who mastered “the system,” which was the embodiment of the definition of “corruption.” In other words: corruption was the system, and the system was corrupt.

It has been well researched, investigated and documented, that from the period prior to time the official investigations of the “Lexow Commission” and “Mazet Committee” (1895 & 1894/5 respectively) that Devery, and many others in the PDNYC, could not have attained the wealth of their worldly goods on a “policeman’s salary.” Like many others who wanted to be police officers, Devery “went along to get along” and paid the requisite $300, $400, and $14,000 for appointment, promotion to Sergeant, and promotion to Captain, respectively, only to earn a salary that was far less than those amounts. 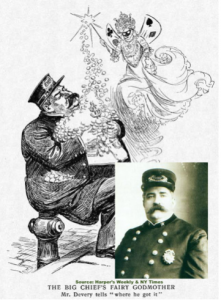 Once Devery mastered the system, he could be found in the evening “holding court” at the corner of Eighth Avenue and Twenty-first Street where information was exchanged, favors sought, and debts settled. A few of Devery’s favorite words of wisdom tell much about the man: “See, hear, and say nothing; eat, drink and pay nothing,” “When you are caught with the goods on, don’t say nothin’,” and a “Yogi-ism” “Take my success in life as 100 percent. My idea is that 75 percent of it is energy, 20 percent luck. But luck ain’t goin’ to walk in and shake hands with any man.” Eventually, however, the system took its toll on “Big Bill.” Devery died on June 20, 1919 with an estate in deficit of over $1,000.

Another “Devery” on the force who, while not as influential or infamous as “Big Bill,” made department history and could not escape being associated with “Big Bill” in life, or in the press. The newspapers of the day wrote much about the PDNY and their officers, and police officer Andrew Devery was no exception. Rarely was his name written in an article, however, without a reference to his as William’s brother. Andrew’s career may not have been as colorful or renowned as Bill’s, but he certainly had an active, interesting career. In fact, Andrew cheated death more than once. Of historical significance, Andrew was the first officer in the history of “the job” to hold two different ranks!

Andrew Joseph Devery was born to Patrick Devery and May (nee Geoghegan) Devery, in Manhattan in 1858, four years after his big brother Bill. His father, Patrick, died in 1879, and his mother, Mary, in 1890, never having lived to see the police careers of their sons fulfilled.

On June 1, 1891, Andrew was appointed to the PDNYC, thirteen years after William, who, at the time, was six months away from being appointed to the rank of Captain. Andrew “the brother of Sergeant Devery of the Thirty-fifth street station” (The Sun, April 22, 1891) must have seen how lucrative the profession could be if an officer were so inclined. (Note: There was not yet a rank of Lieutenant.) The Evening Telegram, April 2, 1892, reported that Patrolman (Ptlm.) Devery was assigned to the Leonard St. Station.

On May 9, 1896, Ptlm. Devery, while patrolling the piers near West Houston St., was alerted by bystanders of a fight between two salvage-fireboats battling for control over a third boat that was on fire – a fee for their service at stake, these “battles” were fierce. Devery shouted commands to one of the Captains to back off and a verbal argument ensued. When the boat docked, Devery “leaped aboard to arrest the Captain” and was met with “a swift stream of water” aimed at him by the crew using the firehose! A fistfight ensued between the crew and Devery and “life aboard the (boat) was far from pleasant” for him! The Police steamer (named) “Patrol” arrived to extinguish the fire and its Harbor squad officers assisted Devery in the arrests.

In 1897, Ptlm. Devery was assigned to the MacDougal St. Station, where, in an article about an incident, it mentioned that he is the “brother of Captain Devery” of the West 125th St. Station. 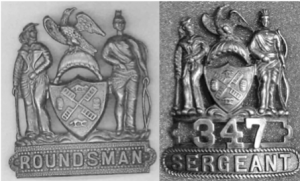 On November 14, 1898, Ptlm. Devery, “a brother of Chief Devery,” was made “the first permanent Roundsman” in the PDNYC and was assigned to the Central Office Squad. The article from The New York Times continued with an interesting piece of information concerning the rank of Roundsman. “The rank of Roundsman, the board holds, has heretofore been a detailed one. The action of the board may mean a wholesale reduction of Roundsmen in the course of a week.” (Note: The “board” was the “Board of Alderman” – today’s “City Council.” “Detailed” in this context meant “appointed” with no civil service protection from demotion.)

The title of “Roundsman” dates back to at least 1836 when the Board of Alderman enacted legislation to replace the existing City Watch with the Police Office. The title would later, be replaced by the title “Sergeant” on April 19, 1907, when the latter became a permanent rank in the department. The Central Office Squad worked out of police headquarters, which was located at 300 Mulberry St., Manhattan under the direction of the Chief of Police and commissioners. When assigned to the Central Office Squad, or another Inspection District, and used to monitor the activities of Patrolmen, Roundsmen were referred to as “Shoo-flys” and were the bane of a Patrolmen’s existence as they were “written-up” (or “dido’d” in the vernacular oft the day) for the most minor of infractions, which often resulted in fines.

The Evening Telegram, August 10, 1899, reported that Roundsman Devery “brother of the Chief” was second in command to Deputy Chief Moses Cortright when raids were conducted against “opium joints” in the infamous, vice-ridden, and corrupt “Tenderloin District” of Manhattan. According to the records of the New York City Landmark Preservation Commission, the “Tenderloin was “roughly bounded by 23rd and 42nd Streets and Fifth and Seventh Avenues (by the turn of the century, it extended northward and westward). The name was supposedly derived from Alexander S. (‘Clubber’) Williams; upon his appointment in 1876 as Captain of the 29th (sic actually 19th) Police Precinct that served this area, stated that he looked forward to getting some of ‘the tenderloin’ after long service in other neighborhoods” which he referred to as “eating chuck” steak.

The New York Press, on January 5, 1900, reported that while assigned to the Central Office Squad, Det. Sgt. Devery “brother of the Chief of Police” raided locations in the Tenderloin District, the most desirable assignment for corruption-minded police officers. Such raids were lucrative to those officers with information about their imminent execution as well as in the seizure of currency as a result.

The World, on September 15, 1900, was the to first report his promotion. Andrew Devery “of Chief Devery’s staff” was promoted to Detective Sergeant. “In promoting them the police Board disregarded the Civil Service Commission. From the promotion of Andrew Devery from Roundsman, a permanent rank, to detective sergeant, is drawn the conclusion that the Commissioners at last publicly admit that the rank of Detective Sergeant is also permanent.” (Note: As in the case Devery’s appointment as the first permanent Roundsman, this fact is another historically significant precedent.)

Even when covering his private life, Andrew could not escape mention of his brother. The Evening Telegram, August 1, 1900, wrote “Roundsman Andrew Devery, brother of Chief Devery, was awarded the honors in the diving competition” at a Frederick C. Cruger Assn. picnic.

The Evening Post, December 21, 1900, wrote that Chief Devery “and his brother Andrew” came to the assistance of a Patrolman who rapped (Note: “rapped” meant that he banged his nightstick on the curb or pipe) calling for assistance while making an arrest. The New York Herald, January 2, 1901, wrote that Det. Sgt. Devery “a brother of Chief Devery” rescued a woman and child from the wreck of a streetcar by pulling them through a window.

On January 8, 1901, Andrew was promoted to the rank of Sergeant. In an article in the Brooklyn Daily Eagle on the promotions, it was mentioned that Chief Devery caused a “sensation” by walking into the board meeting where the promotion was on the agenda without invitation. The Chief’s presence certainly would have made a point that he was “on top” of his brother’s pending promotion, which was approved.

On March 20, 1901, The Sun, wrote that Sgt. Andrew Devery, “brother of Deputy Commissioner” led a funeral procession. The New York Herald, May 18, 1901, wrote that, after learning of a well executed plan by his colleagues in a neighboring precinct to “shoo” vagrants into his precinct, Sergeant Andrew Devery, “a brother of the Deputy Commissioner” was active in the Thirteenth Street Police Station “shooing” the interlopers back to the originating, neighboring precinct.

The Illustrated Buffalo Express, October 13, 1901, mentioned that Det. Sgt. Devery visited Buffalo to attend the New York Police Exposition. Who better to represent the Deputy Commissioner in a force of nearly 9,000 men than Andrew Devery? Even something as mundane as a transfer caught the attention of the press and his relation to “Big Bill.” The Morning Telegraph, January 15, 1902, reported that Det. Sgt. Devery was transferred from Detective Bureau to the Seventeenth Precinct. “Devery is the brother of former First Deputy Commissioner Devery,” it read. Likewise, the New York Herald, March 9, 1908, noted that Lt. Andrew Devery, “brother of William Devery, formerly Chief of Police,” was transferred to the Church St. Station.”

In 1903, the New York Herald wrote that Sgt. Devery escaped death when, while walking on a sidewalk at 109th St. & Broadway, a cornice fell, surrounding him with fallen bricks. Remarkably, the New York Herald, August 25, 1909, reported that Lt. Devery, Second Precinct, escaped death when a typewriter fell from a window sill of 203 Broadway, which was next to a police station.

In another bizarre incident, reported in the New York Press on October 14, 1912, Lt. Devery apparently took control of an ape that broke free from its cage in a pet store and ate several valuable Japanese fish! (Speaking of “Big Fish,” there was no mention of Big Bill here.)

On November 8, 1916, the New York Herald reported that Lt. Devery, residing on 104th Street, saw smoke emanating from the Lenox Avenue Subway line. Devery reported it by telephone, and aided in rescue of the 2,500 injured.

A resident of the Bronx, Lt. Andrew Devery, of the Beach Street Station, died in 1926. “A Lieutenant for twenty-five years,” Devery reposed at his residence at 2350 Creston Avenue, The Bronx. Andrew left behind his wife, Catharine and sons, Andrew, Jr., William S., & Walter S. Not even at this, his moment of death, could Andrew escape the press’ association of him to his infamous big brother. The headline of the obituary in the Brooklyn Daily Eagle read “Lt. Devery, Brother of Former Chief, Dies.” Andrew Devery was a member of the Police Anchor Club, the Harlem Boat Club, and served as Marshal of the Holy Name Society.