On December 22, 1916, Police Commissioner (PC) Arthur Woods, a true reformer who brought many innovations to the police department (PD) and promoted crime prevention, announced that more than $1,300 had been voluntarily donated to a “Police Christmas Tree Fund” by members of the force. PC Woods stated that officers donated “small amounts from their small salaries,” with a “unanimous interest in this Christmas celebration, the first of its kind in the history of the force.” 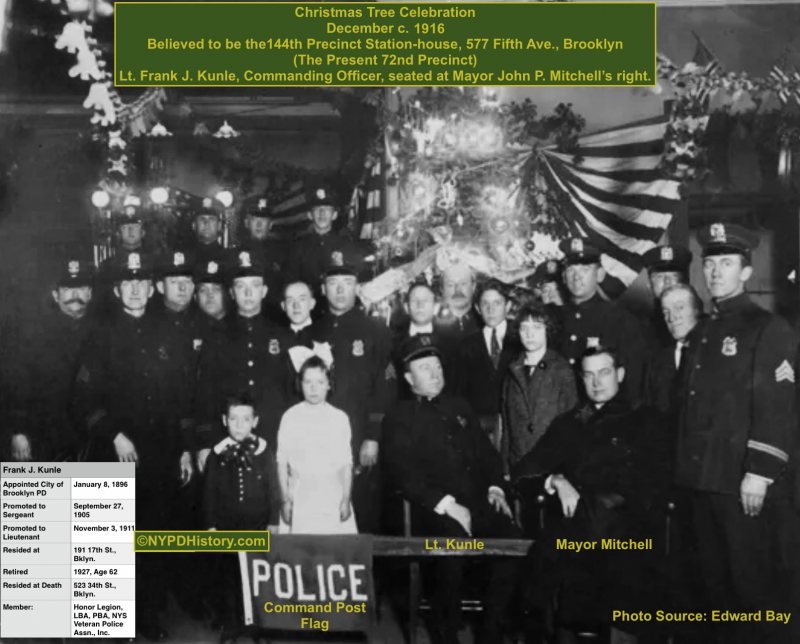 Reporting later on the efforts and results, PC Woods wrote in an annual report that Christmas celebration in over fifty precinct station-houses included trees, yule-tide decorations, dances, songs, moving pictures, addresses by Captains, and presents for children and their families who otherwise would not have celebrated Christmas. In addition to the funds donated by the officers themselves, over $50,000 was ultimately donated by the city’s residents and that the result of the effort created a “spirit of better co-operation between the public and the police.”

PC Woods praised the voluntary efforts of residents in assisting the officers to decorate and prepare their station-houses for the events. Some precincts reported that as many as 2,500-3,000 children visited their commands. Each child received candy, toys, and clothing. Their families, if in need, received vouchers for food redeemable at local butcher shops, grocery stores and fuel oil dealers.

Carrying on the tradition, in 1918, the regular force and their counterparts in the Police Reserve (a predecessor of today’s Auxiliary Police Force) hosted 400 children in their Brownsville, Brooklyn precinct station-house, where the Captain, Isaac Frank, played the role of Santa Claus. Likewise, thousands of children throughout the city were beneficiaries of a combined effort of the PD, civic and religious groups, and military organizations. The war effort (World War I) had resulted in a great number of families in need that year and the PD could not have handled hosting the events alone.

More than 12,000 families received food supplies for Christmas dinners, clothing and essentials supplemented the toys and gifts typically given to the children. The bands of the Fire Department and U.S. Postal Department played at the 69th Regiment Armory, Lexington Av., Manhattan, to the thousands in attendance. Celebrations by various entities continued at different venues through New Year’s Eve. The City came together like never before to meet the needs of their fellow citizens! Similar celebrations continued during the Christmas seasons of 1919. A headline of an article published in the New York Times, on December 5, 1919, read: “CITY’S CHRISTMAS HAPPIEST IN HISTORY; More Festivals, Less Poverty, and Larger Sales and Donations Than Ever; THOUSANDS OF POOR FED; Scores of Celebrations Arranged for Children, Service Men and Hospital Patients.”  The future of Arthur Woods’ innovation seemed bright!

Inexplicably, as early preparations were underway for the 1920 Christmas season, the Grinch apparently stole Christmas! The Mayor was still John Hylan. What had changed? PC Arthur Woods left office on January 1, 1918, and after a short stint by another individual, Richard Enright became PC on January 23, 1918. Hence, there was a new PC in town. It was left to the First Deputy Commissioner John A. Leach, Acting as PC (APC), to break the bad news to the press corps as PC Enright was “out of town” until after the New Year.

A headline of an article published in the New York Times, on December 5, 1920, read: “NO POLICE STATION CHRISTMAS PARTIES; Fifty thousand Children of Poor Will be Disappointed this Year; Patrolmen Sorry Also; They Liked Playing Santa Claus Under Arthur Woods Plan and Worked Hard At It.”  In the article, APC Leach offered explanation and many officers, who wished to remain unnamed, expressed their disappointment and offered their personal opinions.  The Christmas celebrations were among many successful innovations by PC Woods which were discontinued and reversed when PC Enright took office.

On December 25, 1921, the New York Times reported in an article, that PC Enright had amassed donations of $1,000,000 in conjunction with the Knights of Columbus, Welfare Department, Ladies Garment Workers Union, and the Salvation Army. The monies and the efforts of these entities would address the “widespread misery” existing throughout the City by the poor would be addressed at local military armories by members of those entities as well as Policewomen of the NYPD’s Women’s Precinct, located at an empty station-house at 434 West 37th St. This was a far cry and departure from a PD grass-roots effort led by the PD.

Between 1921 and 1939, little information was found regarding and resemblance of the PD Christmas season events. Mayor LaGuardia (1934-1945), and his PC, Lewis J. Valentine would revel in the joy of having the PD lead the Christmas season’s celebrations, as is evidenced in annual articles which appeared in the PD’s magazine publication, SPR-3100!

PC James O’Neill is continuing this tradition as is evidenced by the dozens of “tweets” sent out by his Commanding Officers. Kudos to him, and the proud members of the PD for their selfless efforts to meet the needs of the needy children and their families and to strengthen the ties between the communities they serve and the PD!

“What’s the Deal With:” The NYPD’s tradition of hosting Christmas celebrations for needy children & families? The tradition dates back 100 years, to 1916, when officers contacted money from their salaries and purchased a tree and gifts for families in their precincts. PC Woods endorsed the program and it spread citywide serving tens of thousands of families.

A blessed and merry Christmas, and a happy safe, and prosperous New Year to all from all of us at www.NYPDHistory!