The history of those who policed New York City over the centuries and their use of this seemingly minor piece of equipment, carried today by every uniformed officer, may not be the “sexiest’ topic for discussion, but the whistle played a vital role in an officer’s duties and personal safety. Even after approximately 254 years of documented use, there were, essentially, only two styles of whistles used.

The earliest record of the use of a whistle found to date indicates that in 1762 colonial New York was a dangerous place, particularly at night. In this period, Night Watchmen, which included: constables, sheriffs, justices of the peace, and jail keepers were responsible for patrolling the streets of NYC, which had barely extended beyond what is known today as lower Manhattan.  With little or no training, these men were armed only with sticks, staves, and sometimes muskets.  To attract the attention of citizens, and other watchmen to danger, and to call for assistance, they would sound an alarm by the ringing of a hand-carried bell, “rapping” their stick on the pavement, or blowing a wooden whistle.

The above advertisement, from an 1897 catalog by the police supply company S.A. French & Co. of NYC illustrates the types of whistles available at the time. The photograph depicts a whistle from the author’s collection, which is made of horn, but likely is very close to the design of that used in earlier periods.

As with several things in the history of policing NYC, there have been little change over the centuries.  The following quote is from an 1898 Rules and Regulations of the New York Police Department(NYPD) “All patrolmen carrying a night baton will use the same while requiring assistance, as well as the whistle when necessary.” A twenty-six inch night baton was carried at night, as opposed to an eleven inch day stick, which was carried in the day.

The following excerpts were taken from the 1908 Rules and Regulations of the NYPD and relate to the use of a whistle in summoning aid as well as the direction of traffic. 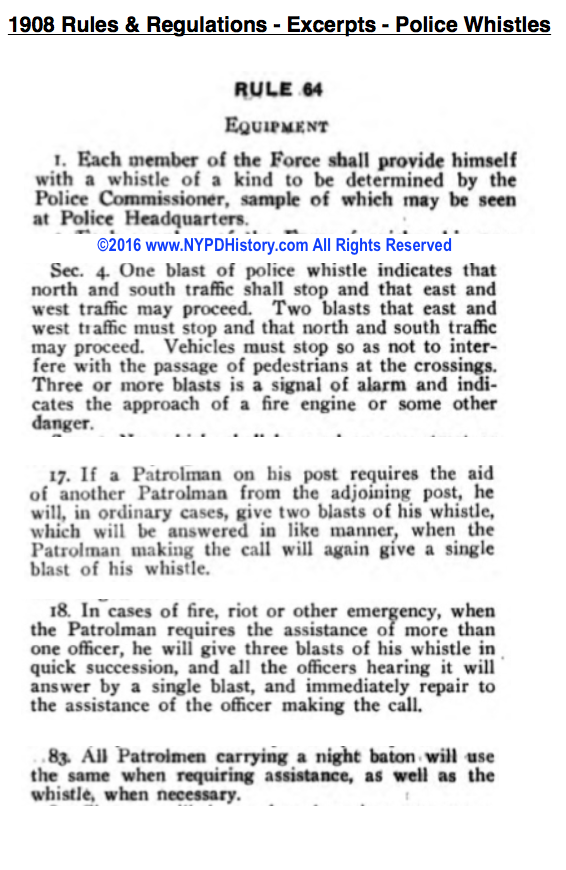 In 1921, the NYPD used a whistle invented by H.J. Carmody which was seen as an improvement over the cylindrical Police Whistle. Using an outer and inner sleeve, the whistle was able to be closed, preventing dust balls and other pocket crud from entering the whistle.  Deputy Police Commissioner Joseph A. Faurot, who rose through the ranks, is credited with introducing the use of fingerprinting as a means of identification in the United States and obtaining the first criminal conviction using fingerprint evidence. Faurot was a fifty-percent Assignee on the invention of the whistle, which bore his name.  Faurot had his name on other equipment as well, including a latent fingerprint lifting kit. 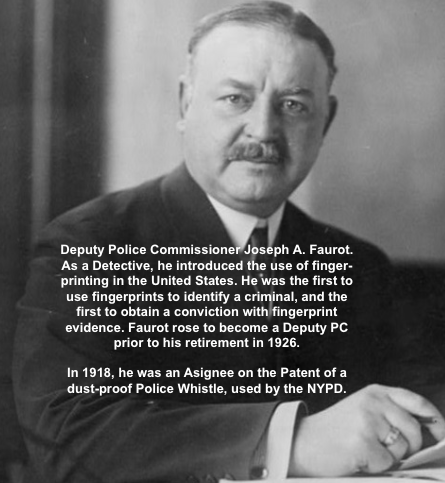 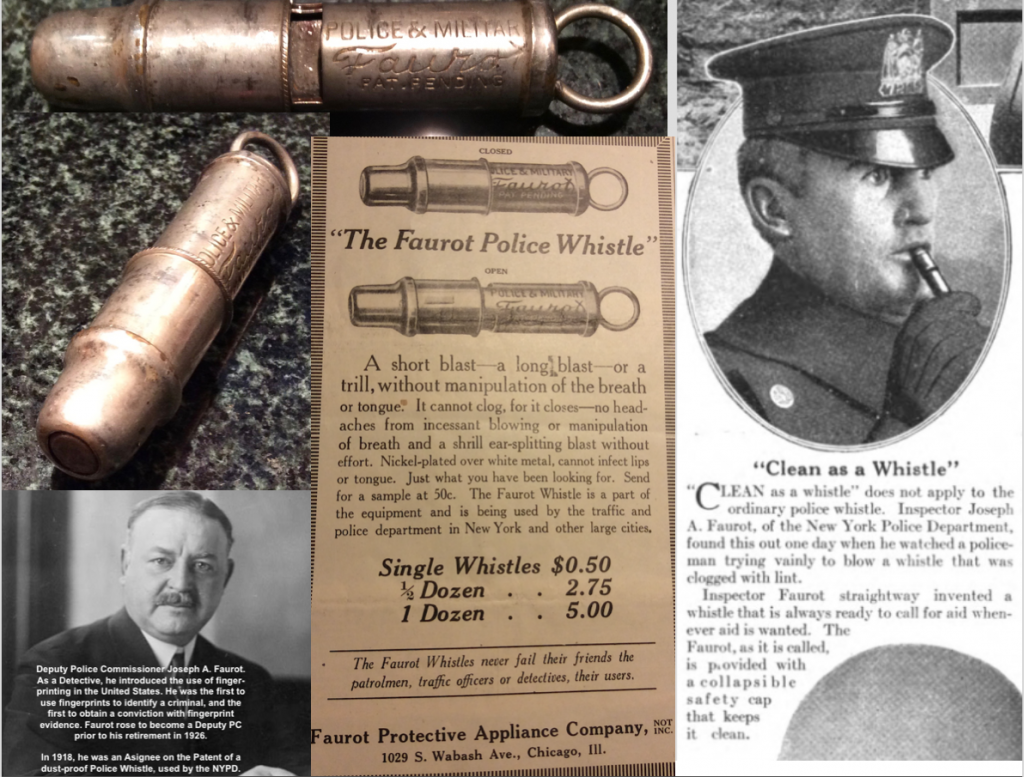 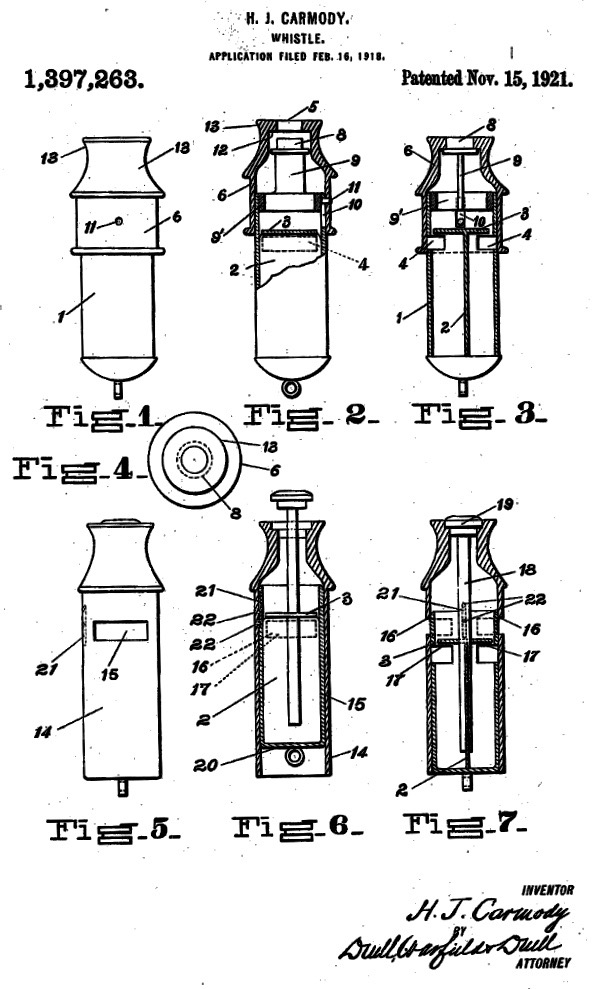 In 1929, the NYPD’s Police College (today’s Police Academy) conducted eighteen hours of training for traffic officers and included instruction in the use of hand signals, whistles and semaphores (an instrument used as a signal or sign with a specific meaning).

In 1939, an instruction card published by the NYPD for the use of drivers continued to reflect the use of the whistle for the control and direction of pedestrian and vehicular traffic.

The 1940 Rules and Regulation of the NYPD reflected little change from those in 1908. The addition of traffic light signals and designated “Whistle Crossings” were added.  Note that if a traffic light was present, whistles were not to be used.

Below is a 1946 photo of an officer in Central Park carrying a cylindrical whistle in addition to chain nippers, a restraint device dating back nearly seventy-five years. In his pocket, the end of a rubber day billet can be seen.

The 1956 Rules and Regulation of the NYPD contained a new term. Whereas in the past a police whistle (also called cylindrical or tubular) was used for both summoning aid and controlling traffic. In 1956, the required equipment now called for the possession of both “police and traffic” whistles, as well as “nippers.”  The 1956 Rules and Regulations specified the use of the traffic whistle and the use of the same in controlling traffic. Note the continuity of the language dating back as early as 1908. 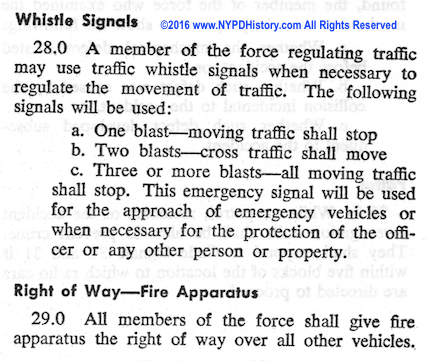 While the sale of the traffic whistle was advertised as early as the 1890s in catalogs, it was not until the late 1940s, perhaps the early 1950s that both styles appeared on the equipment belts of NYPD officers.

The below whistle, circa 1942, was made of Bakelite, a plastic-like substance, but was subject to cracking in cold weather. A brass whistle, coated with a white colored, hardened rubber-like substance followed and can be seen in the series of photos below. All whistles are from the author’s collection. 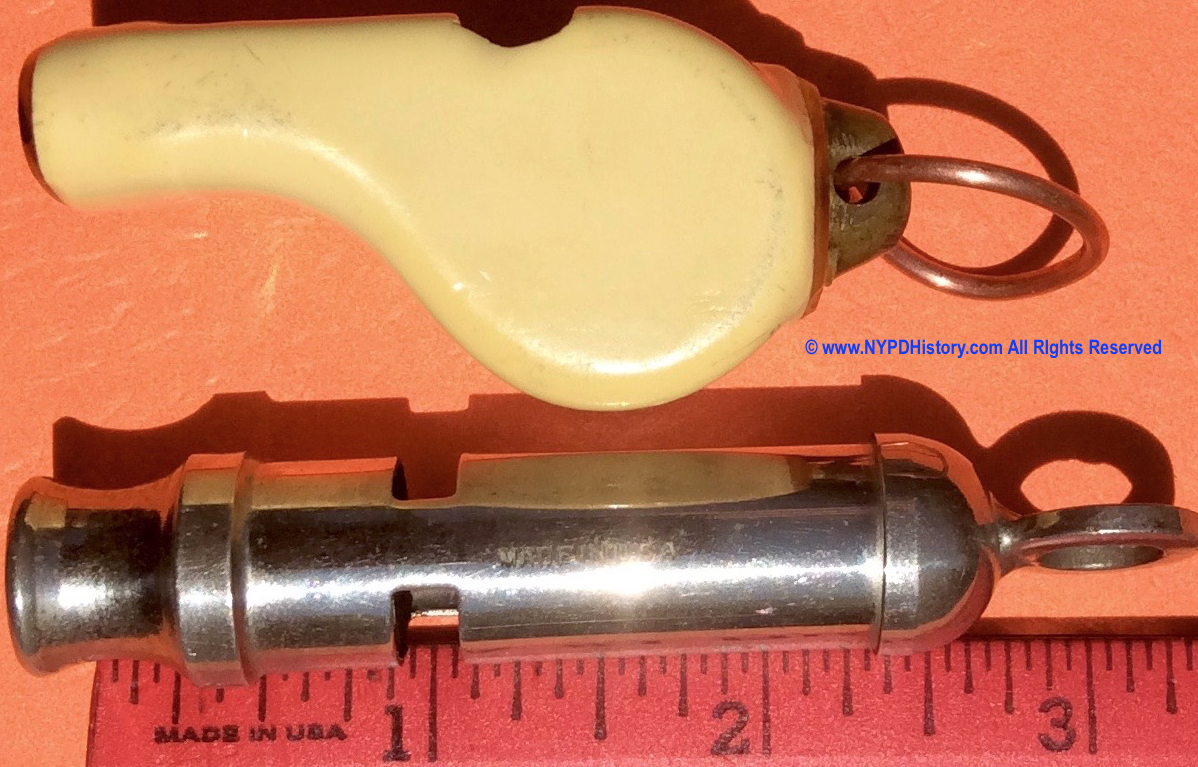 While the exact date that the cylindrical whistle was no longer required/used has not yet been determined, the author was told by friends who served in the period, and by reviewing photos, that they were phased out in the late 1960s and very early 1970s.

If anyone has anything to contribute to this brief history of the whistle, or to correct this post, the author, as ways, welcomes such input.  Today, the control of traffic is capably handled by the professional Traffic Enforcement Agents who are civilian employees under the auspices of the NYPD.