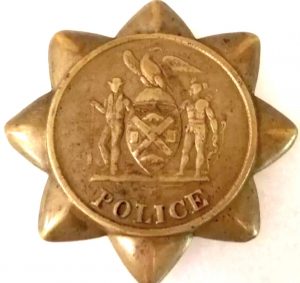 Ask a police historian or collector when the earliest police badge was issued in the City of New York and he/she will likely tell you that it was in 1845, for the newly created “Municipal Police, or Day and Night Watch.” Ask the police historian or collector what was used prior to 1845, and you will likely get a blank stare. The 1845 badge, made of copper, was in the form of an eight-pointed star. The obverse bore the Seal of the City of New York (the city) and the word “POLICE.” Badges, or emblems of office, were necessary as a form of identifying individual officers, because uniforms had not yet been prescribed, adopted, or worn.

The Common Council of the City of new York (today’s City Council) was comprised of the Board of Alderman and a Board of Assistant Aldermen. The common council prescribed which officials, in selected offices, were authorized to wear “badges and emblems of office.”

As of the writing of this article, coverage of this topic has not been found in books, or papers, written about the history of policing in the city. This article deals with badges and emblems of office issued to police officials, and other officials, in New York City, between 1800 and 1845.

The language “badges or emblems of office” comes from official records of the common council and refers to: clothing, hats, caps, helmets, copper badges, and staves of office. The word “office” is used interchangeably with “authority” by many sources.

An example of a pre-1845 badge of authority, are staves of office. The use of staves of office was likely carried to this country by the British, where the length and adornment of the staff depicted the authority vested in the bearer. For example, ranking British police officials carried, and carry to this day, a small staff called a “tipstaff,” to represent their office and authority. Some tipstaffs contain a compartment where a document denoting the office, officer, and the authority of their office is stored. In New York City, during the eighteenth and nineteenth centuries, staves of office were routinely provided by the city to elected and appointed officials as a symbol of office and authority.

As early as 1806, the common council ordained “That it shall be the duty of constables and marshals of this city to repair, immediately on the alarm of fire with their staves of office, to the place where such fire may be.”

According to the The Minutes of the Common Council of the City of New York, dated June 12, 1807, the council adopted a proposal that staves:

“be immediately adopted and worn by said Marshals & Constables as a Badge of Office a white Wand one foot long and one Inch in Diameter with the arms of the City painted thereon and the word Marshal, Constable, High Constable or First Marshal as the case may be written therein in large letters underneath the Arms. said Wand to be made of some hard and strong Wood such as lignum vita (Note: Tree of life wood) and to be worn in a side Pocket, in the coat. (sic)

According to various official city records, staves were described as being “worn” and not carried.

The Minutes of the Council, dated December 28, 1807, disclosed that staves were to be “painted and numbered; and to be delivered to the several Constables and Marshals correspondent with their respective numbers.” It is not known if these numbers were unique identifiers or something other.

For the purpose of discussion here, there were two law enforcement entities in the city prior to 1844; the Police-Office and the Watch Department. The titles of officers in the Police-Office were, in part: Constables, Marshals, Bell Ringers (in towers throughout the city, looking for fires), Dock Masters, Lamp (Street) Lighters, and Health Wardens. In 1811, High Constable Jacob Hayes requested that the Common Council direct the Superintendent of Repairs to replace several staves that were “out of repair.”

The City Watch was governed by the Mayor, Recorder, Alderman and Judges of the Supreme Court. The titles under the Watch Department were Captain, Assistant Captain, and Watchman. To date, no mention of staves of office for the City Watch, or Watch Department, was found.

The public also found use for the constables’ staves. In February 1837, due to the near doubling of the price per barrel of flour, a riot, dubbed the Flour Riot, took place. A mob marched to Hart & Co.’s warehouse located at Washington and Courtlandt Streets. The mob violently entered the warehouse and threw hundreds of barrels of wheat and flour out of the windows and onto the streets below. The flour on the street rose to a depth of two to three feet. The mayor and constables at the scene were unable to quell the rioters. Rioters threw flour at the mayor and “treated the staves of office with quite as little respect; for they broke the staves over the constables’ backs.”

In 1844, an act of the New York State Assembly, which was later adopted by the city, replaced the Police-Office and formed the “Municipal Police, or Day and Night Watch.”

Another source disclosed that “The duty of marshals and constables to attend at fires, with their staves of office, etc., was abrogated by the acts passed in 1844, ”abolishing the watch department and office of marshal.” It is important to note that the officers under the auspices of the Police-Office had duties relating to fires – from observing for fires and sounding alarms (ringing bells), to taking control of the scene and the investigation of cause and origin.

Badges and Emblems of Office of the City’s Police – Post 1845:

While direct evidence has not yet been found that the resulting “suitable emblem or device” was the eight-pointed copper star, it is most likely that it was, because the “star” was  adopted and worn.

In 1845, George W. Matsell was appointed by New York Mayor William F. Havermeyer as the first Chief of Police of the Day and Night Watch (Municipal Police). Under Matsell, the eight-pointed copper star and, a uniform were adopted to identify officers. The force was colloquially referred to as the “star police.”

Staves remained in service after 1845. In 1851, the Board of Alderman approved an expenditure of $137.50 for “Staves for Police Officers.” In 1854, Police Justices were supplied with “suitable stars and staves of offices.” In 1855, the Clerk of the Common Council issued, to new board members, “the usual batons, staves and stars of office.”

In January 1854, prior to the adoption of uniforms, the eight-pointed star was pinned to clothing and was “half the time in an eclipse” – meaning that the star was partially concealed by clothing. Hence, it was almost impossible to identify an officer unless you were in front of him and could see his star. In this period, the star was also worn by members of the common council, board of alderman (and assistant aldermen), the Municipal Police, and other city officials.

The New-York Historical Society’s Staff with the Eight-Pointed Star:

Examples of staves of office carried by the star police are in the possession of the New-York Historical Society. One example, is a single staff topped with a gilded eight-pointed star. The others, are several identical examples of a staves topped with carved, gilded flames atop. These staves are badges and emblems of office and authority of the city police and, to the best of my knowledge, have escaped the attention of historians and collectors alike.

The staff with the eight-pointed star, and the staves with the carved flames atop, were emblematic of the of the “Municipal Police, or Day and Night Watch” which was formed in 1845 and replaced by the Metropolitan Police force in 1857.

The New-York Historical Society’s Staves with the Flame:

The same source provides that the staves with the flame atop were used by a ranking members of the police, and other officials, as early as 1813, which is when the city first appointed members to the fire department.

In May 1817, four years later, a law specified “that in order that the members of the common council, engineers, and fire wardens, may be readily distinguished at fires, the mayor, recorder, alderman, and assistants, shall severally bear…a wand with a gilded flame on top.”

In January 1845, the common council, passed a law containing very similar language to that of earlier fire laws. It was enacted “that it shall be the duty of the constables and marshals to repair immediately on the alarm of fire with their staves of office,” as is detailed in the block quote, from 1813, above.

The custom of city officers wearing staves dwindled after the middle of the century. As the years progressed beyond the Civil War, and into the industrial revolution,  the mention of the use of staves appeared limited to city sheriff’s attending to executions.

The use of staves by city officers and law enforcement dates back to, at least, the 18th century. These badges and emblems of office appear to have escaped the attention of police historians and collectors. Elected and appointed city officers, fire engineers (equivalent of today’s chief), constables, marshals, justices, and the common council used staves to identify their office and authority.

Beginning in 1806, marshals, constables, and other officers under the Police-Office, and on the common council, carried foot long white painted staves, bearing the city seal, title of office, and number. The city council wore staves.

Between 1813-1845, officers under the Police-Office had the responsibility to observe, report and attend to fires in the city. The staves of office with a carved, gilded flame atop, were likely carried by the police, common council, mayor and other elected and appointed officials.

In 1844, the Municipal Police, or Day and Night Watch was created. The city ruled that the police officers “shall carry a suitable emblem or device, by which they may, when necessary, make themselves known.” It is believed that the suitable emblem or device was the copper eight-pointed star worn by the Municipal Police from 1845-1854 without uniforms and from 1854-1857, with uniforms.

The staff with the carved eight-pointed star atop was worn/carried by the Municipal Police from approximately 1844 to 1857.

Collectors and historians now have more information about the police star, staves and emblems of office used by city officials, the police, and firemen between 1800-1850s.

As is the case with any research, the best sources available at the time of writing were sought and utilized in writing this article. In the event that any reader has any questions, corrections, suggestions, constructive criticism, claims of copyright infringement, or comments, feel free to email me at the address below. 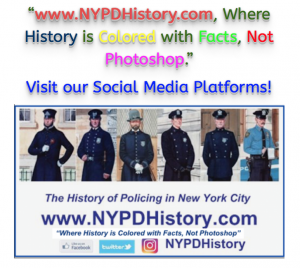