NYC – 1917 – Acting Detective Sergeant Martin Owens, age 33, the son of a policeman, assigned to the Automobile Squad at police HQ, was chosen from a pool of 700 volunteers, and twenty-five candidates (meeting un-married & other qualifications) by Police Commissioner Arthur Woods to drive an ambulance, in France. Owens has the distinction of being the first PDNY officer to volunteer for service in the Great War.

ADS Owens joined the PDNY in about 1908. According to a newspaper source, in 1912, he was awarded a Department Medal of Honor (the Annual Reports for the PDNY do not indicate this medal being warded to Owens). It appears that he was awarded a “medal for bravery.” In 1911, Ptl. Owens was awarded the Automobile Club of America Medal for a fire rescue on May 11, 1910 on Forsythe St., Manhattan. In 1915, he received a Commendation.

To read the ONLY article you will find on the Automobile Club of America Medal, click here:

Ambulances were needed by the Entente forces (“allies” is the best synonym) and many were donated by the wealthy class, and organizations. The Honor Legion, a fraternal association donated this ambulance. ADS Owens’ salary and expenses were paid for by millionaire Vincent Astor, an Honorary Member of the Honor Legion. Initially, Owens, on leave from the PDNYC, joined the French forces, driving for the Ambulance Service, before switching to the U.S. Army, months later.

The ambulance was donated by the Police Department of the City of New York’s Honor Legion. It is important to remember that the U.S. Army had only entered the Great War in June 1917. 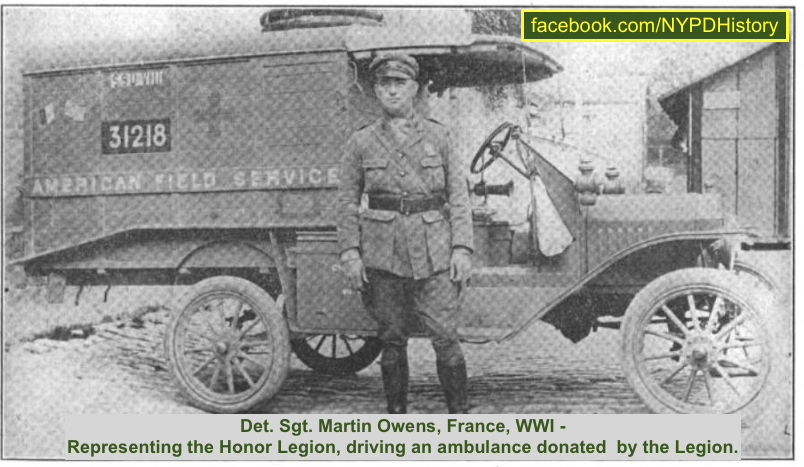 “ADS Owens Reports from “The Front:”

In reviewing ADS Owens’ reports to the PDNY from “The Front,” one can envision the danger he faced and the services he provided to the injured. We are fortunate to have these first hand accounts which provide color to the black and white resources we are left with from this era.

The first report from ADS Owens, dated only 1917 (but likely made during the summer), begins with a mention of his trip to Europe, his arrival in Paris, and his being “processed” into a unit. Once assigned to a division, ADS Owens reported that he, and a partner, were assigned to take their ambulance on daily “tournees” (runs) throughout the towns in the region, which began at 10:00 am and ended at 12:00 pm the next day, in order to transport sick and injured soldiers to hospital.

Regarding his first witness of “action,” ADS Owens reported that he was asleep in his ambulance one night when the report of gunfire nearby woke him up. After checking that the action was not “too near,” he went back to sleep. The next day, others commented that he would be a good soldier as he was able to sleep through the action when others could not. ADS Owens reported that he did not tell them that he was a New York City “cop” and that “cops were supposed to sleep through everything.”

During his “down time,” ADS Owens advised that he had become a good barber and auto mechanic, and requested that members of the PDNY write him so that he had mail to read.

In ADS Owens’ second report, dated August 1917, he reported that his division had advanced to within 300 yards of the front. Owens declared that he received the preverbal “baptism by fire” when he found himself in the midst of small arms and artillery fire to the extent that he could not sleep. During one ambulance run Owens found himself under fire and raced the ambulance out of danger.

ADS Owens also said that he found himself in the position of a diplomat for the United States as he fielded questions from French soldiers about the impending arrival of American troops to join them in their battles against the ”Boche” (Germans). On a quiet Sunday, Owens was asked by a French officer to organize a baseball game for his men. The ballfields was a field used earlier for hand grenade practice! Owens reported that he was the captain of his team; that he played the position of pitcher, and that his team won the game.

In closing, Owens reported that he had the honor of being appointed to the temporary rank of Acting Second Lieutenant for ten days; that he was “enjoying every minute of (his) time (there);” that a photographer had captured an image of him standing with his ambulance (Note: the one in this article) and that his nickname was “The Big Cop.”

In his third report to the PDNY, dated November 1917, ADS Owens reported that he had been under fire many times in the course of his average of four nightly “runs’ to the front lines where he rescued between one and five men per run.

In May 1918, ADS Owens was promoted from the Army rank of Sergeant (Nov. 1917) to Lieutenant & then First Lieutenant. Months earlier, he had been awarded a French medal for bravery while under fire. The incident was connected with the shelling of his unit, which killed all except ADS Owens & few other men. In November 1918, ADS Owens & his crew were awarded the French Cross with Silver Leaf (Croix de Guerre). Owens returned from the U.S. Army as a Captain & rejoined the PDNYC.

In June, 1918, Police Commissioner Richard Enright ordered that all PDNY Shields issued to officers serving in the military, with the exception of Detectives Owens and Bernard Flood (both Lieutenants in the U.S. Army) be recalled due to instances of graft and abuse of power. The abuse was the receipt of alcohol and food at bars and restaurants near the docks and military bases.

However, ironically, in January 1921, Detective Sergeant Owens & Det. Thomas Horan, both of the Automobile Squad, were indicted for taking “unlawful fees.” The allegations were that the men received a gratuity of $100 from a Brooklyn insurance adjuster in connection with a stolen automobile. It was the custom for insurance companies to reward citizens for the recovery of stolen autos. It was forbidden for police officers to receive such rewards as it led to, in fact, collusion with thieves (“You steal it. We recover it. You get a share of the reward & no arrest.”)

Fortunately, in March, 1922, former Detectives Owens, Horan, Andrews, and others, were exonerated when the indictment was dismissed. Owens’ integrity and reputation were intact. 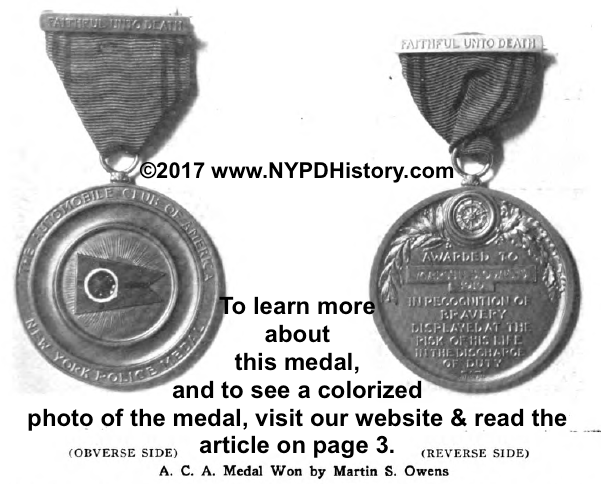 NYPDHistory is the ONLY Page/Group on Facebook where, after two years, you will find relevant,

well-researched, posts on the history of policing in NYC.

Please feel free to share this post in any NYPD/PDNY History or general police or war-interest group, and remember “

www.NYPDHistory.com Where History is Colored with Facts, Not Photoshop.”