The vehicles of today’s Police Department of the City of New York (PDNY or NYPD) are painted in a distinct blue and white paint scheme and are equipped with a vast array of red, yellow, blue and white colored emergency lights. These colors are the result of an evolution that began over a century ago when the department fist purchased a “horseless carriage” for use by the Police Commissioner (PC) in the course of his official duties. The focus of this article is the NYPD’s “first police car.”

Automobiles were first introduced in the New York City Metropolitan area around 1898, and were the “playthings” of the rich and famous. Automobile parades and speed contests were held to introduce the public to these electric, gasoline, steam and naphtha (a combustible liquid) powered “horseless carriages.” With the appearance of horseless carriages (also called “locomobiles” or automobiles), the responsibility of determining how to regulate and deal with these machines was the responsibility of the PC. Complaints from pedestrians, horsemen, and horse-powered wagon drivers, along with an increased number of speed-related accidents, and reckless automobile drivers, demonstrated the need for the PDNY to own an automobile in order to address these growing issues and to facilitate the transportation of the PC around town.

The earliest use of an automobile by a police officer in the performance of his duties, may be considered by some to be the intermittent commandeering of privately owned automobiles by officers, but that does not answer the question. To address another apparent first, on January 11, 1903, The New York Times reported that “Police Commissioner Greene in a two-seated automobile, and accompanied by Secretary Coursey and Inspector Brooks made an unheralded tour of down-town station houses yesterday.” The owner of the vehicle is not reported, but the vehicle was not owned by the PDNY, as it pre-dates the city’s purchase of the first automobile for the department.

On April 28, 1905, PC McAdoo petitioned the Board of Alderman to purchase an automobile for the Police Department without public bid. The request was approved on May 9, permitting PC McAdoo to purchase one automobile.

In the July 6, 1905 issue of a journal entitled The Automobile, we learn a great deal about city-owned motorized machines in the various departments. PC McAdoo is reported to have commented, “if the experiment is satisfactory it is likely he (McAdoo) will recommend the purchase of one for use by Deputy Police Commissioner Thomas F. Farrell in Brooklyn.” The article disclosed that there were three “motor bicycles” which were utilized by the PDNY which gave “satisfactory service, especially in chasing automobiles who break the speed laws.”

The table below, which appeared in the same article in The Automobile, illustrated that the order in which city automobiles were purchased followed the hierarchy of the organizational chart of city government, namely the mayor first, then borough presidents, followed by department commissioners. 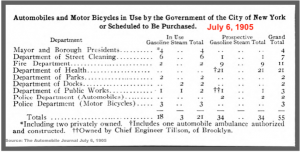 An incredibly detailed, informative article, dated October 15, 1905, in the New York Herald, provides great insight into the issue of traffic safety and the PDNY’s enforcement of the laws relating to automobiles and speed enforcement.

The article predicted that the police will need to utilize automobiles and motorcycles to enforce the speed law, to combat the use of motorized vehicles by criminals in the commission of, and in their fleeing from, acts of crime. “The means of rapid locomotion obviously should be in the hands of the police as well as of the citizens whether they be honest or dishonest.” At this point in time, motorcycle officers, were the only officers capable of stopping the 23,000 automobiles for violations.

When asked by the reporter of The Automobile, “is it practicable to increase this service (automobiles) so that automobiles will be brought into play by the police” to catch criminals fleeing in autos? PC McAdoo replied, “No. I think not. It is used, I believe to some extent in the city of Boston, but there is a double danger when you have a high powered automobile chasing another through” congested streets. PC McAdoo opined that motorcycle officers were better suited for such pursuits and that he would seek to increase the number of officers detailed on motorcycles in the near future. Clearly, the inherent risk in automobile pursuits dates, literally, to “day one.”

In the article PC McAdoo mentioned his “40 horse power Panhard.” This is the earliest documentation found to date of the name of the manufacturer of the first automobile owned by the PDNY; namely a French-made, imported, forty horsepower Panhard-Levassor! The firm of “Panhard and Levassor” was the first in France to manufacture an internal combustion engine in 1876.

It seems that the PC McAdoo’s experiment was a success because, on February 16, 1906, his successor, PC General Theodore A.Bingham (1906-1909), petitioned the Board of Alderman for three additional “automobile carriages” at a cost not to exceed $16,000 and for funds to repair the current (first) automobile. In May, the City of New York issued Special Revenue Bonds to pay for the automobiles. Included in the request was a statement that part of the money be used to repair “the automobile” owned by the department. It was suggested to the PC that he purchase one automobile at a cost under $4,000 and two at a cost of under $2,500 each. Ultimately three autos were purchased with funds raised by the issuance of Special Revenue Bonds.

An article appearing in the newspaper The Sun, on July 10, 1906, provides another historically significant find! The article, entitled, “Speed Busters Cross the Bay,” reported on the activities of police officers who travelled across New York Harbor to Staten Island to enforce the speed laws. The article reads “Commissioner Bingham’s now famous auto busters took a trip to Staten Island in the Commissioner’s Panhard, under the leadership of Chief Buster Ben Mallon (sic Mallam).” In describing the police car, the article reads “There was no Police Department sign on the hood of the machine and the green colored lamp which usually adorns dashboard of the Commissioner’s car was conspicuous by its absence.” Benjamin Mallam was a Bicycle Squad Patrolman who was assigned to the Central Office Squad (as headquarters was known at the time) and reported to the PC. The photo, dated 1910 (inset) is Sergeant Benjamin Mallam. 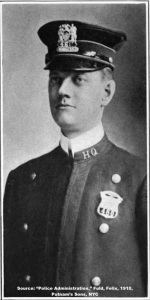 Those of you familiar with the color of the lights used on police cars in New York City and New York State likely took note of the mention of a “green-colored” illuminated lamp which, today, is codified by the NYS Vehicle & Traffic Law as being designated for volunteer ambulance service vehicles. Yes! The first colored lamp used to identify New York City Police car was green and the year was 1905! Having only black and white images available in the period, we must rely on descriptions such as this to provide information about such details. This is the earliest information located (to date) about the first police car and the color of its distinctive, identifying, green-colored lamp and is another historically significant find of interest to police historians.

Green is the “traditional” color of “New York’s Finest,” being used since at least 1871 in the glass lenses of lamps outside of each precinct station-house. The traditional explanation for this color, and the custom of green-colored lamps outside of police stations, dates back to the late seventeenth century with the Dutch possession of the city, known then as “New Amsterdam.” In that era, “The City Watch,” comprised of Watchmen, patrolled the dark streets carrying lamps which were hung outside of their small “Watch Houses” when they were inside the “house.” This, it is said, was a signal to the citizenry that the “the Watchman is in the house.” However, (to date) a written description of the color of the lamps carried by the Watchmen was not found.

According to the “Annual Report of the Police Department” for the year ending 1906, the Panhard was scheduled to be transferred to the Street Cleaning Department.

please share this with friends and check back soon!

*Editor’s Notes: Since the initial publication of this article, additional information about the automobile thought to be the 1904 Panhard was discovered by the Author. The vehicle, pictured below, is actually a later vehicle, circa 1909-1910, located in front of the newly opened Police Headquarters at 240 Centre Street.

The Author welcomes comments, constructive criticism, and additional, or contrary, information on this and his other articles. Email Admin(at)NYPDHistory.com 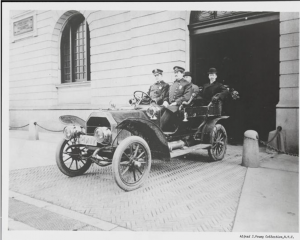